A Wintry Mix of Crystals 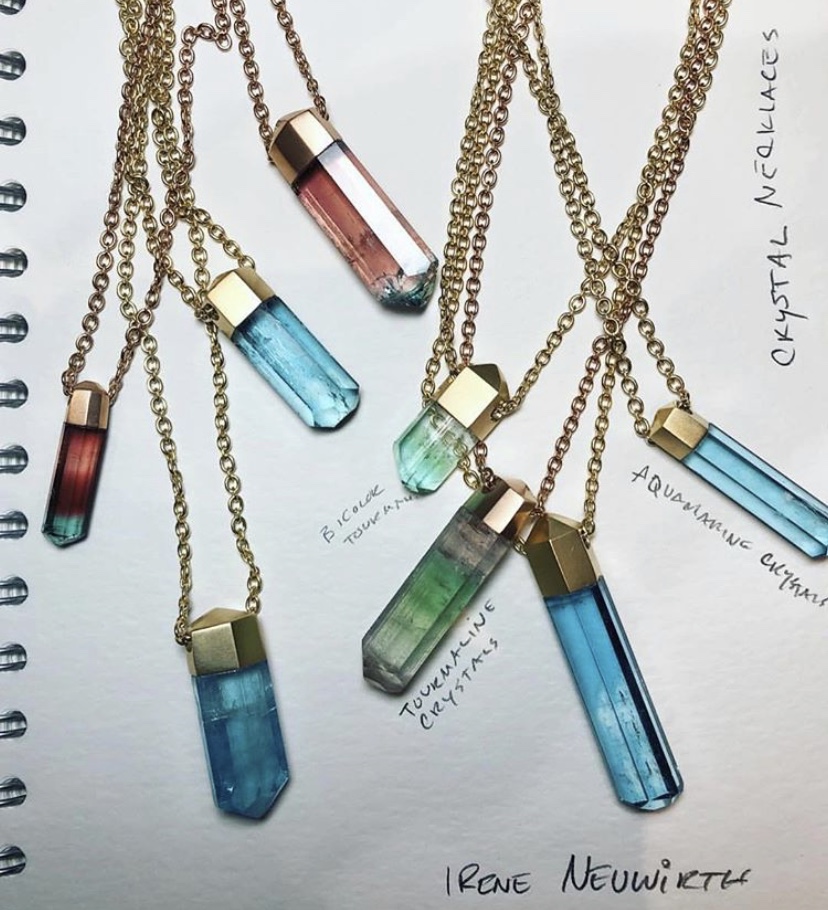 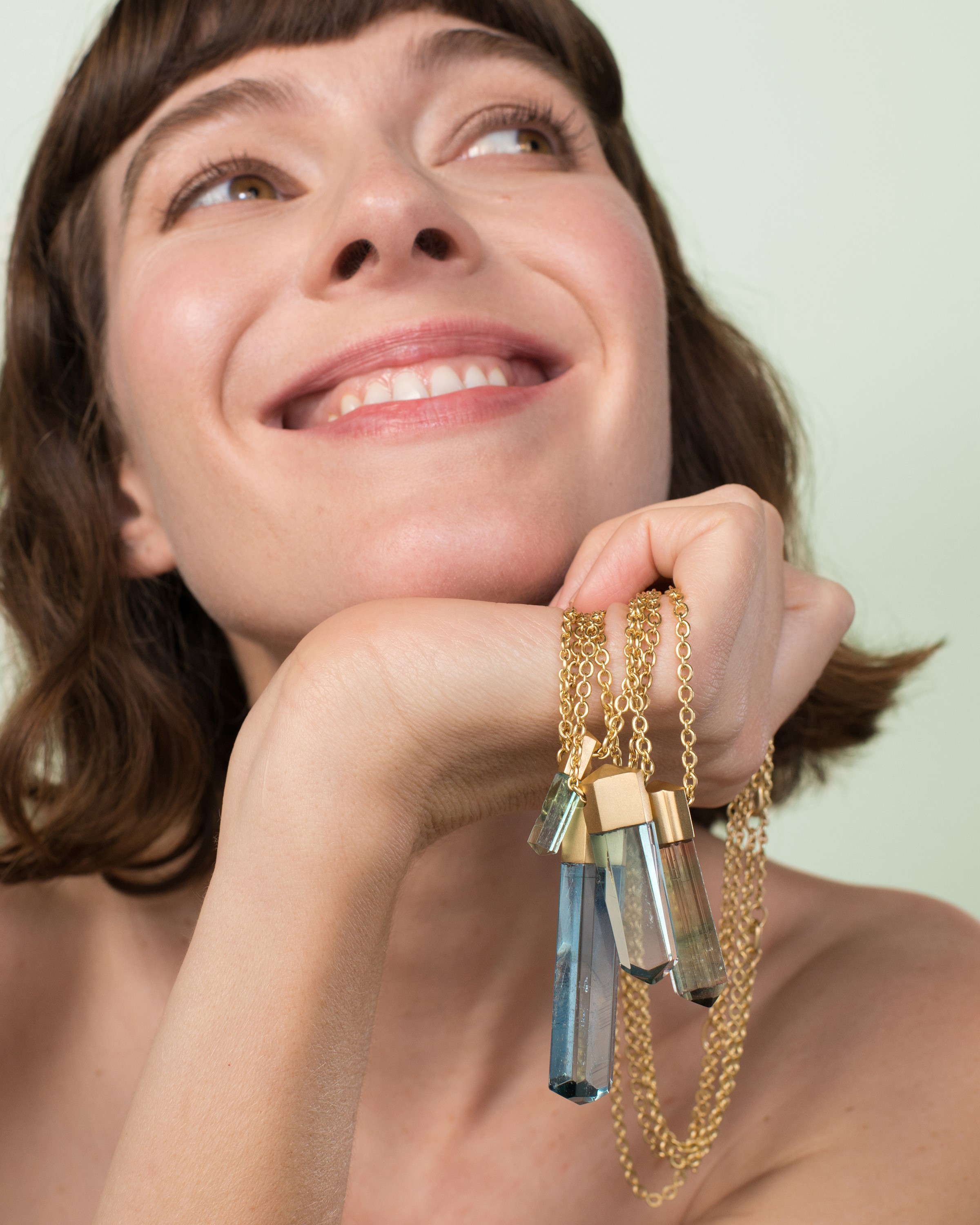 Lapis (pictured here with diamond pavé) is a stunning intense deep blue colored stone composed of multiple minerals. The three major minerals that comprise lapis are lazurite, calcite, and pyrite. The blue color is derived from lazurite, a blue silicate mineral of the sodalite group. The unique variations of gold and white fleks from Calcite and Pyrite, as you can see in the piece to the left, are stunning against the deep royal blue color.

Labradorite is a member of the Feldspar family and is treasured for its remarkable play of color, known as labradorescence. The stone, usually gray-green, dark gray, black or grayish-white, is composed in aggregate layers that refract light as iridescent flashes of peacock blue, gold, pale green, or coppery red. The predominant blue varies within the light, displaying hues from deepest blue to various shades of pale, almost blue-green.

Rainbow moonstone is a variety of labradorite that displays a blue or multicolored adularescence on a very light, white and translucent body color. The unusual adularescence are created by the albite inclusions and it almost appears like a light flash.

Fine aquamarine gems are part of the Beryl family, which also includes Emeralds. Aquamarines are commonly flawless, with inclusions being quite rare in the stones extracted as opposed to emeralds which are often heavily included. The name aquamarine comes from the Latin root words “aqua” meaning water, and “marine” meaning of the sea which makes perfect sense given the blue hue of the ocean. Fine aquamarine gemstones get their blue color from trace amounts of ferrous iron. The color ranges from blue-green to deep blue, and its tones can vary from very light to moderately dark.

Watermelon Tourmaline gemstones are mixed crystals of aluminium boron silicate that containing multuple elements including sodium, lithium, iron, potassium. or manganese. The stunning multi-colors that form in a tourmaline are a result of the mixing of elements that occurs during the crystal's formation. The concentration of each element will affect the color as well as the saturation. 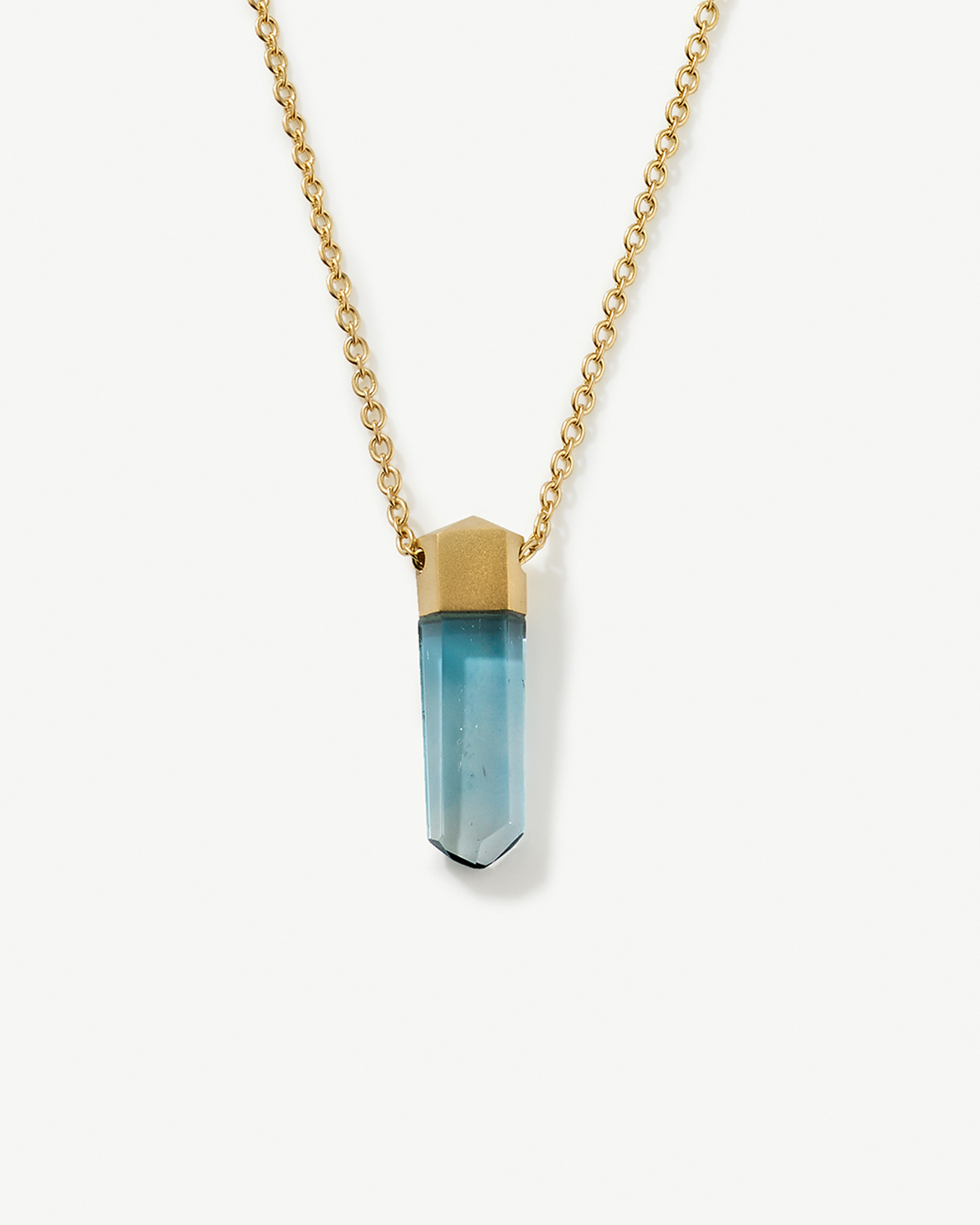 One of a Kind Fine Aquamarine Crystal Pendant 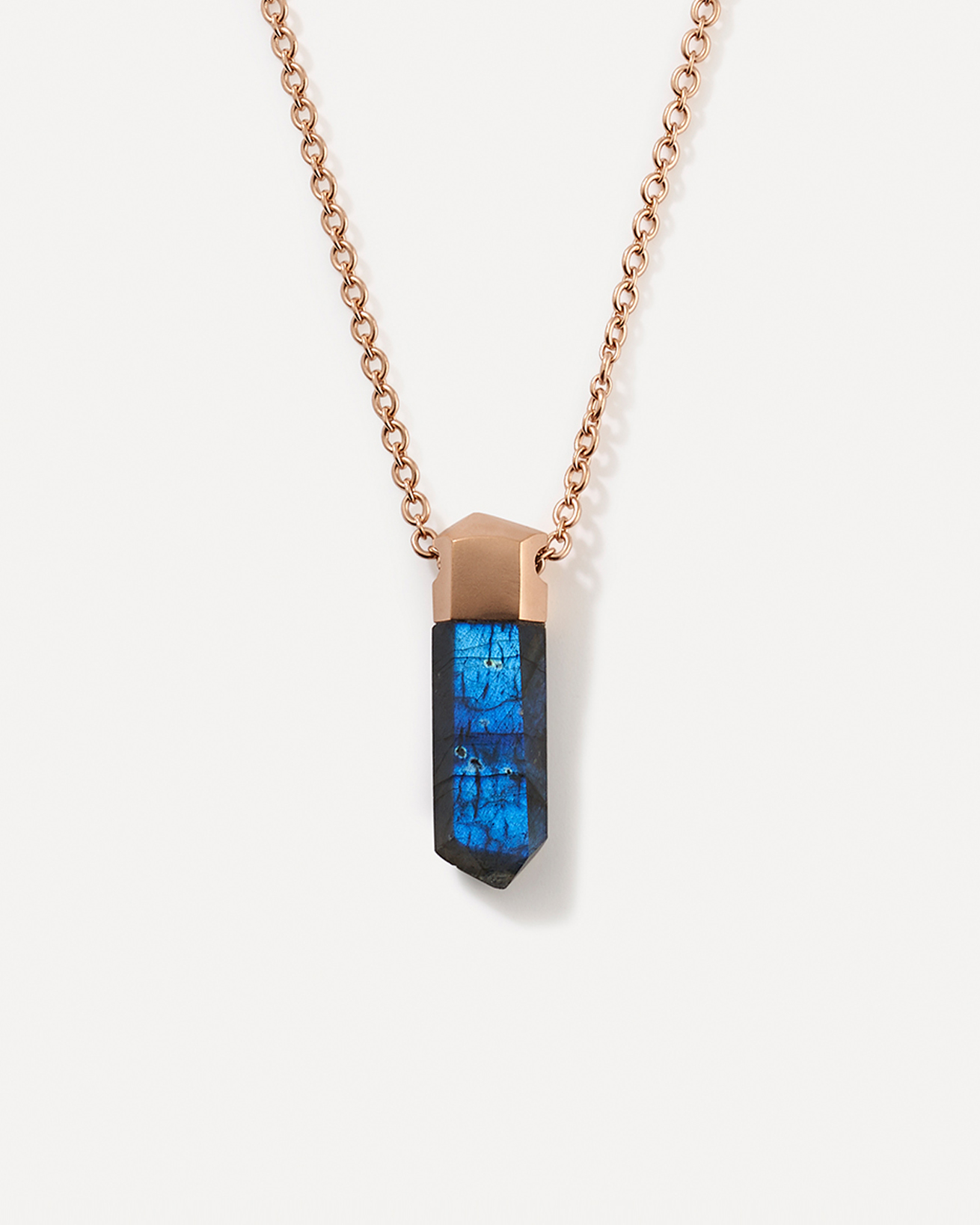 One of a Kind Labradorite Crystal Pendant 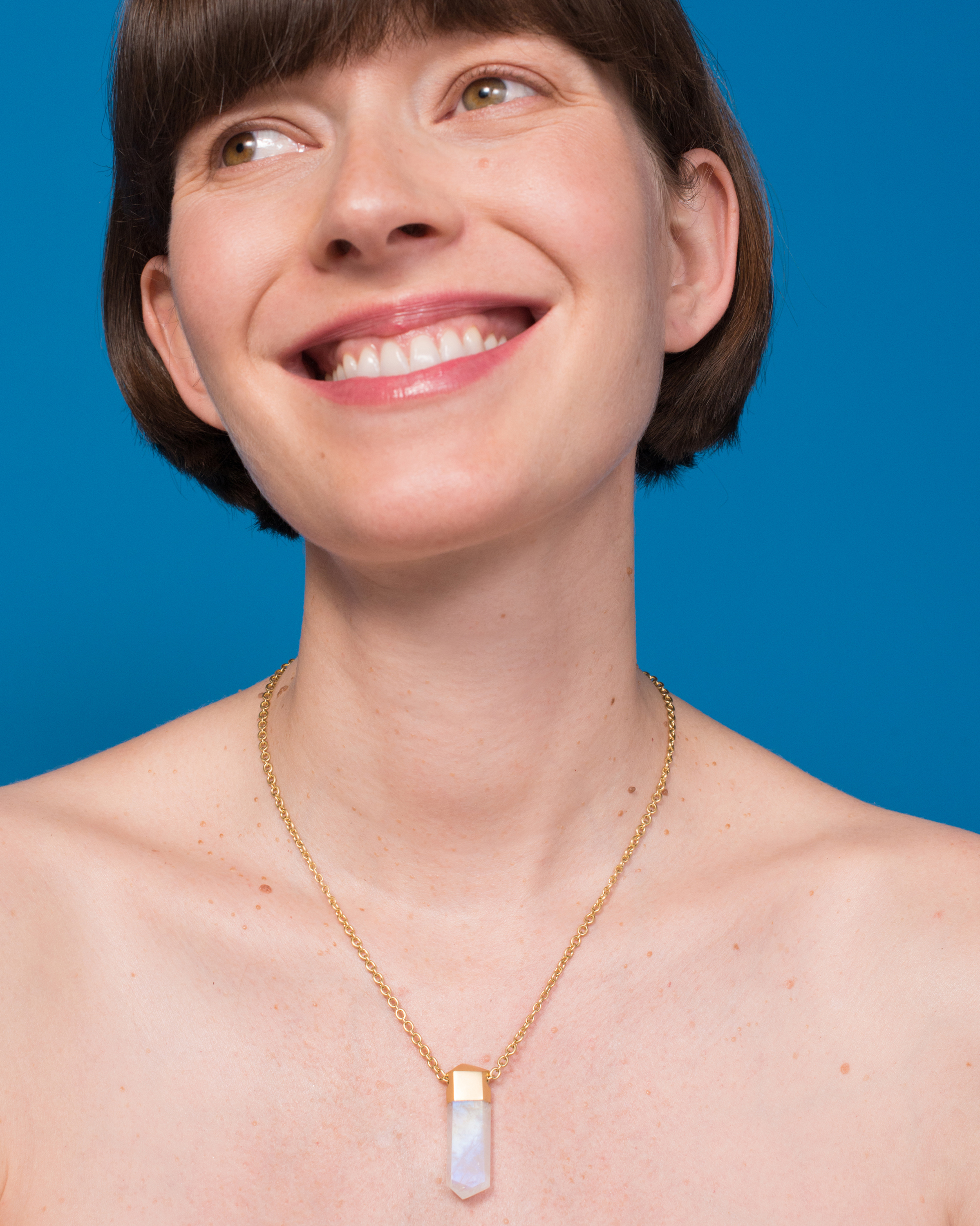 One of a Kind Rainbow Moonstone Crystal Pendant 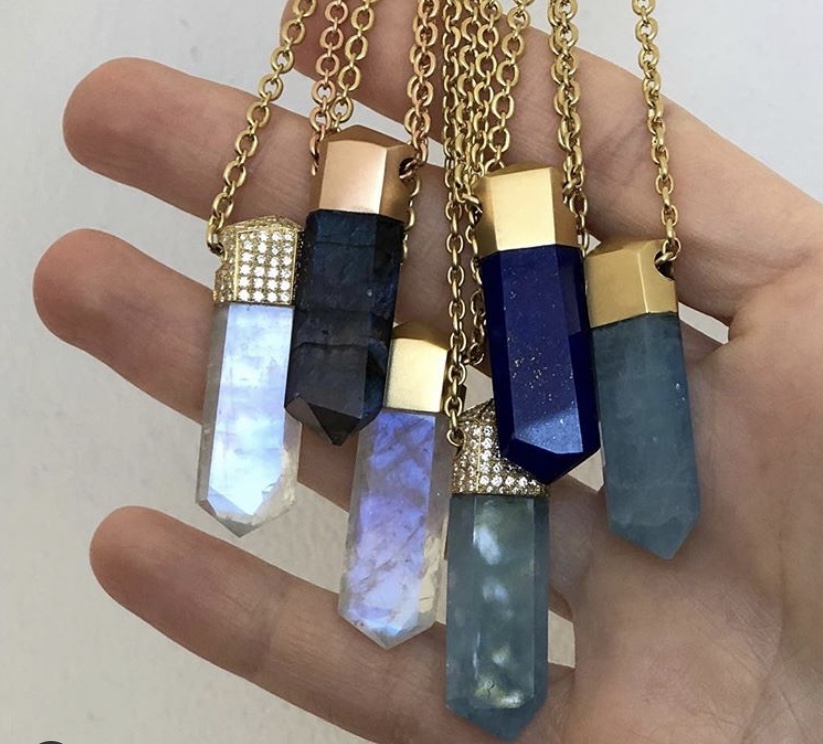 Crystal pendants showing play on color created with the light.

One of a Kind Large Crystal Pendant Necklace